WASHINGTON, Sept. 30 (UPI) — Medicare paid about $54 million in possibly fraudulent ambulance transport services in the first half of 2012, according to a study by the Office of the Inspector General.

Medicare Part B, which covers medically necessary services and preventive services, paid about $5.8 billion for ambulance transports in 2012, nearly double the amount paid in 2003.

“Historically, Medicare has been vulnerable to fraud involving ambulance transports,”the Inspector General’s office said in a statement. “In 2013 and 2014, the Centers for Medicare & Medicaid Services imposed temporary moratoria on the enrollment of new ambulance suppliers in two metropolitan areas.”

The study concluded that Medicare paid $24 million in the first half of 2012 for ambulance transport that did not meet program requirements to justify payment, an example being $17 million paid for transportation to or from destinations not covered by Medicare, such as physicians’ offices.

Medicare also paid an additional $30 million for ambulance transports in instances when beneficiaries did not receive services anywhere.

The Office of the Inspector General conducted the study by analyzing claims data for 7.3 million ambulance transports during the first half of 2012. Investigators examined transport billing information including transport destinations, transport levels, distance of urban transports and other Medicare services received. 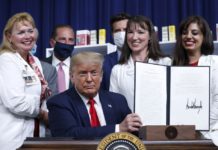