Feb. 28 (UPI) — Oshkosh Defense LLC announced on Wednesday that the U.S. Army placed $75 million in orders for trucks and trailers.

“Together with the U.S. Army. we have established a robust FMTV program,” said Pat Williams, vice president and general manager of U.S. Army and Marine Corps programs for Oshkosh. “We look forward to successfully completing the remaining FMTV A1P2 deliveries and seamlessly transitioning to FMTV A2 production without interruption.”

The heavy-duty vehicles are in a class known as FMTV and are based on a common chassis, with variants for payload and mission requirements. Derivations include five-ton tractors, 10-ton dump trucks and cargo trucks with six powered wheels.

Oshkosh Defense first received a U.S. Army contract to build FMTV models in 2009, and has since delivered over 38,000 trucks and trailers to the Army.

In 2018 the company obtained a contract for the next FMTV generation, identified as the A2, and has begun building vehicles for testing. Low-rate production is expected to begin in 2021. 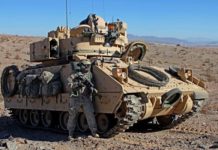