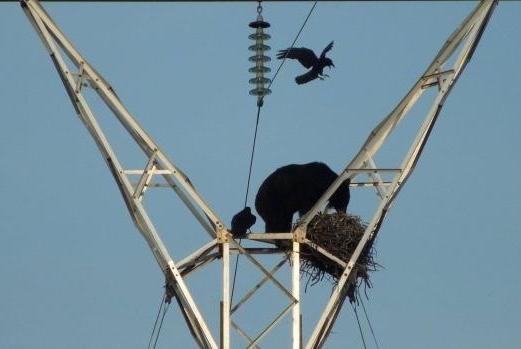 FORT SMITH, Alberta, May 25 (UPI) — When a raven builds its nest at the top of an electrical tower — a few dozen feet in the air and surrounded by power lines — it likely scratchers black bear off the list of potential invaders.

But not all bears have the fire safety scruples of Smokey the Bear. Recently in Canada, a group of hunters witnessed a black bear ignore the risks and scale a massive electrical tower in hopes of a free meal. Safe at the top, the bear was rewarded with a few uncontested raven eggs.

Ravens can regularly be seen poking and pestering hawks and eagles, and they employed similar defensive techniques as the bear climbed the tower. But they were no match for a hungry black bear. By the time hair scavenger reached the top, the two avian victims were resigned to their fates. They could do little more than watch on in despair, as their reproductive efforts became bear food.

The scene was photographed and filmed from start to finish by hunters who were in search of bison near Wood Buffalo National Park in northern Alberta. The hunt’s host was Linda Powell, a resident of North Carolina and the director of media relations for O.F. Mossberg & Sons, a guns manufacturer in the United States.

“I noticed this bear standing on his hind legs at the base of the power transmission tower,” she told USA Today. “The bear’s posture indicated that it was considering climbing the pole and within seconds, he began to navigate his way up with relative ease.”

Once the bear finished the meal, he climbed down the tower to solid ground — unscathed and seemingly satiated.

“None of us had ever seen anything like that in all of our years or our time out in the field hunting,” Powell told CBS News.