NEW MEADOW, Idaho, April 4, 2020 (Gephardt Daily) — A man wanted for the attempted murder of Adams (Idaho) County deputies has been taken into custody after being found near the residence of his parents, in New Meadow.

“Law enforcement agencies have been working together to locate James, who is wanted for attempted murder after shooting at Adams County Deputies,” a statement from the Idaho State Police says.

“The deputies were responding to a call for assistance from James’ family after he violated a protection order. James also shot at an Idaho Fish and Game Officer, who was in the area and stopped to assist the deputies.”

Captain Matt Sly, with the Idaho State Police, said he was grateful for all the officers who responded during the investigation and arrest.

“Now the people in New Meadows can feel safe in their homes, knowing Mr. James won’t continue to be a threat.” 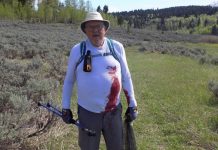