SALT LAKE CITY, Utah, Nov. 19, 2021 (Gephardt Daily) — Jen Shah’s assistant Stuart Smith has pleaded guilty to the charges against him regarding his involvement in a fraudulent nationwide telemarketing scheme.

Smith, 43, previously pleaded not guilty, as did Shah, star of “The Real Housewives of Salt Lake City.” He changed his plea during a Friday appearance before Southern District of New York Judge Sidney H. Stein.

Two months after pleading not guilty, Shah filed a motion asking the court to dismiss all charges on the grounds of “legal and factual insufficiency” and suppression of evidence. The judge denied that motion in August, and her trial is now scheduled to begin in March 2022.

Stein set Smith’s sentencing for March 3 and released him on bail in the meantime. The judge also noted that the maximum combined sentence for the three charges is 70 years in prison.

“The Housewife and the Shah Shocker,” premiering this month, will dive into the accusations against Shah. A press release said the documentary will feature interviews with some of Shah’s friends, employees and family members, as well as the alleged victims of the telemarketing scheme.

Shah’s arrest was captured by the RHOSLC cameras and aired in an episode earlier this month.

The documentary premieres Nov. 29 on Hulu. 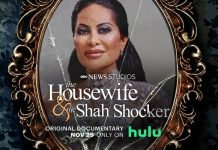