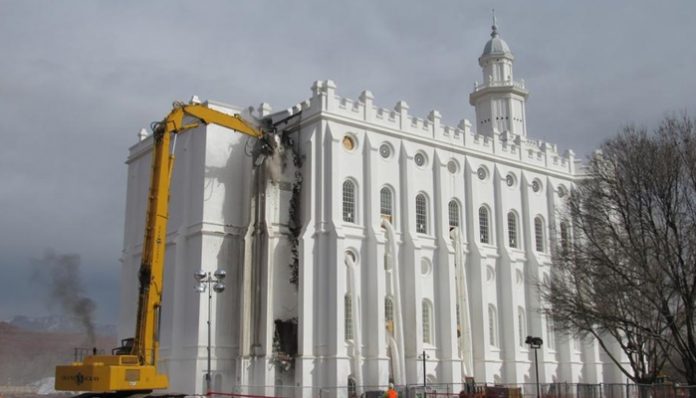 ST. GEORGE, Utah, Feb. 3, 2020 (Gephardt Daily) — The first phase of the renovation of the St. George Utah Temple of The Church of Jesus Christ of Latter-day Saints is underway in Southern Utah.

Twentieth-century additions on the north and west sides of the building have been removed, said a news release from the LDS Church.

The temple was closed for renovation in November 2019 to undergo extensive structural, mechanical, electrical, plumbing and finish work, the news release said.

Construction began on the St. George temple in November 1871. Since its dedication on April 6, 1877, the pioneer-era temple has undergone several significant renovations.

“One of the aspects of this project is preserving the original building,” said Eric Jamison, project manager. “The structure of the building is in fantastic condition given its age. Despite its age, the temple has endured very well.”

Some system upgrades will be made to the temple, including mechanical, electrical and plumbing work.

Crews will work to preserve as much of the original craftsmanship as possible.

“The point of all of this is to preserve the building while making it safer and more functional,” said Emily Utt, historic sites curator for the Church.

She said that dozens of small details have been found to help historians better understand the history of the temple. “So, for the first time in 100 years, we’re able to see where the original door openings were in this building, what the floor plan was, what the paint colors were.”

Plans for the renovation were released in May 2019. The temple renovation is scheduled to be completed in 2022. Following a public open house, the temple will be rededicated.