The break was located near 2350 W. 1500 South, which is an industrial area, Captain Adam Archuleta, Salt Lake Fire Department, told Gephardt Daily. SLCFD crews arrived within 5 minutes, and Dominion Energy crews were there in 20 minute, he said. The SLCFD first tweeted about the incident at 1:56 p.m.

“Construction crews were doing some work, installing conduits for utilities, and struck a 2-inch natural gas line,” Archuleta said. “The gas leaked out and mixed got mixed with the ambient air, and did not get into buildings, although we did have crews monitoring that.”

As of about 3 p.m., Dominion crews were working to shut off the gas from a short distance away so they could begin repairs on the broken line, Archuleta said, adding he had no idea when the work would be done.

Because the area was already blocked off for the construction crews, traffic was not affected, he said.

Archuleta said people in the area will smell gas until the line shut off, but the concentration in the air not at all dangerous. He said the gas leaks are much more dangerous when they leak into a confined space with an ignition source.

“Once we can mitigate that, which we were able to do quickly today, it’s just a matter of repairing the damage.” 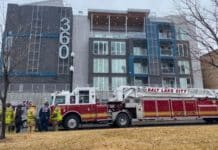 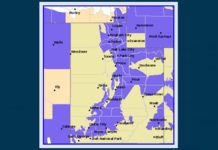