SALT LAKE CITY, Utah, Aug. 5, 2019 (Gephardt Daily) — A Salt Lake City man has been arrested after the alleged rape of a 9-year-old girl.

The arresting officer wrote in the statement that a 9-year-old girl was interviewed at the Children’s Justice Center who said that she had been raped by Gouin.

The child’s mother went through her daughter’s phone and found text messages from Gouin asking the child for pictures, the statement said. The child said she took photographs of her private parts and sent them to Gouin by text message.

Those images were located after a forensic download of the phone. Gouin asked three times for the girl to send pictures to him, the statement said.

The girl also said that a few weeks ago when she was at Gouin’s home, he asked her to perform a sexual act on him, and threatened her if she didn’t, so she did.

Gouin also raped the girl in his home twice, she said. Afterwards, she said “her body didn’t feel good.”

The suspect was taken into custody as he pulled into his driveway, the statement said. He was transported to the Unified Police Department investigation building and read his rights. Gouin said he would speak with the officer. When the officer told Gouin what the child had said, “Matthew said he messed up and he didn’t know why he did it,” the statement said. “He said maybe the reason was because of the child’s innocence. Matthew admitted he did ask her for pictures of herself. He said he did ask her to delete the pictures after they were sent.”

He also said he did have the girl perform sexual acts with him.

“Matthew said if he goes to jail, they’re going to kill me,” the statement said. “He asked for an attorney at that time and the interview was done.”

Gouin was transported to the Salt Lake County Jail with his bail set at $100,000. 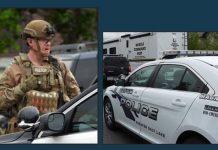