“surprise!!! i am beyond thrilled, honored, excited to be joining @kellyclarkson @johnlegend @blakeshelton next season ~ season 21 of @nbcthevoice! @nickjonas we will miss you,” she wrote on Instagram.

“So excited to welcome Ariana to our Voice family!!” he wrote.

Grande also confirmed the news in a statement.

“I’m so honored and excited to join ‘The Voice’ family!” she said. “I have been a huge fan of the show for such a long time. I can’t wait to go head-to-head with the incredible coaches, get to know these new artists and help to take their craft to the next level.”

“The Voice” is a singing reality competition series that is currently in its 20th season on NBC. 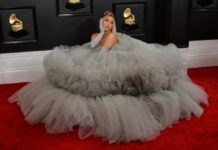