SALT LAKE CITY, Utah, Oct. 2, 2019 (Gephardt Daily) — The Church of Jesus Christ of Latter-day Saints has announced that women may now serve as witnesses in ordinances including baptisms performed in chapels and temples.

Church President Russell M. Nelson announced the change in policy related to witnesses who participate in baptisms in local congregations and in temple work, the Church said in a news release.

The announcement was made to general authorities and general officers of the Church during the leadership session of the Church’s 189th Semiannual General Conference. The instruction was also sent as a First Presidency letter to Church leaders.

Previously, only priesthood holders could serve as official witnesses.

The changes are as follows:

“We are joyful about these changes,” Nelson said. “Imagine a beloved sister serving as a witness to the living baptism of her younger brother. Imagine a mature couple serving as witnesses in the temple baptistry as their grandson baptizes their granddaughter for and in behalf of a dear ancestor.”

Nelson said adjustments have been made to temple ordinances throughout the LDS Church’s history.

“Any adjustments made to ordinances and/or procedures do not change the sacred nature of the covenants being made,” Nelson said. “Adjustments allow for covenants to be planted in the hearts of people living in different times and circumstances.”

Nelson concluded his remarks by stating that “the temple is the object of every activity and every advancement in the Church. All our efforts to proclaim the gospel, perfect the Saints, and redeem the dead lead to the holy temple. He has and always will direct how ordinances are to be performed so that we can understand and internalize our covenants with Him.”

On Thursday, Oct. 3, the leadership meetings will continue with instruction from the Quorum of the Twelve Apostles and other senior leaders of the Church, including General Officers of the Church’s organizations for children, women, youth and Sunday School.

The general sessions of this weekend’s conference will begin Saturday at 10 a.m. 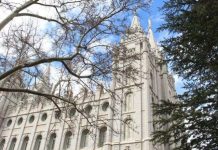 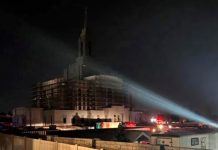