WOODRUFF, Utah, May 22, 2022 (Gephardt Daily) — A Rich County man is being held without bail after he reportedly told a dispatch operator he was thinking of running over a neighbor to kill him, then allegedly tried to do so.

Suspect Matthew Ryan Morris, 27, faces a charge of (attempted) murder, a first-degree felony, and one of disorderly conduct, unreasonable noise in a public place, an infraction.

On Friday, officers with the Rich County Sheriff‘s Office were alerted to a dispatch call said to be from Morris.

“Officers arrived in the area and were in the process of setting up containment when the garage door to Mr. Morris’ house began to open. Mr. Morris was observed in the driver’s seat of the vehicle and began to drive out of the garage. Officers moved in quickly and performed a felony stop and took Mr. Morris into custody without incident.”

Morris asked officers to view phone videos he had sent his mother of the altercation with the victim.

“The video showed that after Mr. Morris had attempted to run over the victim he returned to the front yard of the victim’s residence and remained for over eight minutes, honking his car horn repeatedly and yelling out profanities and threats towards the victim,” the RCSO probable cause statement says.

“Mr. Morris has called into dispatchers over two dozen times with complaints of noise and claims that people are harassing him, including the United States government.” 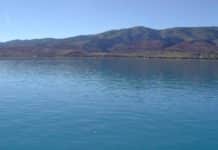