Haddon will be going to work as the executive director for the Utah Board of Pardons and Parole, said a news release from the Office of the Governor.

“Mike is truly an exceptional leader,” Gov. Gary Herbert said in a statement. “He has served the state of Utah well in his role at the Department of Corrections, and I have no doubt that he will continue to render extraordinary service in this new role. The state is lucky to have him.”

Since his appointment, Haddon has continued focus on the development of the new prison that will be west of the Salt Lake Airport, the news release said. He has also worked with his leadership team to help individuals successfully exit the justice system while also focusing on staff development and needs. Most recently, UDC has been fully engaged in work to prevent and contain COVID-19 within the prison system, and Utah was one of the last states nationally to experience an outbreak of the virus, officials added.

“It has truly been a humbling experience to work alongside the men and women who have dedicated their careers to public service — specifically serving those who are too often overlooked by society,” said Haddon. “These individuals certainly merit public support and public admiration. The years that I have spent with the Utah Corrections team are years I will treasure forever. Though not being asked to step down, the timing of this change feels natural as Utah transitions to a newly elected Governor.”

Haddon was appointed Deputy Director of Administrative Services, Utah Correctional Industries and the Clinical Services Bureau for the Utah Department of Corrections in January 2007 and again under the direction of former Executive Director Rollin Cook in 2013. In addition to supervising department functions such as finance, research, records, information technology and policy, Haddon has served as the agency’s legislative liaison.

Prior to his service with Corrections, Haddon served as director of research for the Utah Commission on Criminal and Juvenile Justice and the Utah Sentencing Commission. He earned his undergraduate degree from Boise State University and Master of Public Administration, with an emphasis on criminal justice administration, from the University of Utah.

Haddon’s departure will be effective Dec. 12. The governor will appoint an interim director in the near future. 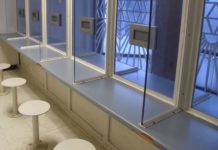