Ogden Police Lt. Cameron Stiver said the crash happened at 9:32 p.m., when a Volkswagen, driven by a 17-year-old male, was eastbound on 24th Street.

“It looks like the driver couldn’t negotiate the curve and hit a westbound Dodge Charger,” Stiver told Gephardt Daily.

The 17-year-old driver possibly sustained a concussion in the crash and was transported to the hospital as a precaution, Stiver said.

The teen’s 16-year-old male passenger was critically injured and was transported to the hospital, where he was undergoing surgery late Friday night.

The driver of the Charger “was fine,” according to Stiver.

The accident is still under investigation and it isn’t known if speed was a factor; however, Stiver described the curve leading up to the crash as “a horrible turn, and very dark.” 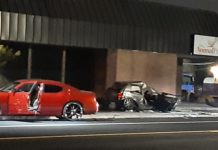 Police on scene of crash on 24th Street in West Ogden 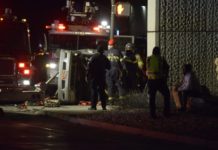